Adriana Hartley began her legal career as a Court Appointed Special Advocate in 2007, where she advocated for the best interest of abused and Social Security Attorney Adriana Hartleyneglected children in the legal system. While she was fortunate to experience extraordinary success with some cases, she became frustrated that the underlying issues faced by these vulnerable populations continued to be overshadowed by the lack of resources in their community. It was this frustration that led Adriana Hartley to graduate from the Oklahoma City University School of Law in 2015 and focus on a life-long career in the public interest arena.

Initially, Adriana Hartley represented disability claimants through Legal Aid Services of Oklahoma. She eventually left Legal Aid for the private sector, where she developed a more in-depth approach to research and writing, but never lost her love of serving those in need. Her primary area of practice is Social Security Disability law, and she is licensed in Oklahoma and the United States District Court for the Western District of Oklahoma. She aims to connect to each disability claimant by truly understanding their needs, and it is that skill that has helped her tremendously grow as a person and as a professional.

In her free time, Adriana Hartley enjoys being outdoors in any way possible. She is hoping to complete her first 14er by the summer. 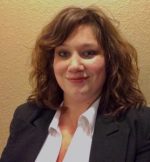